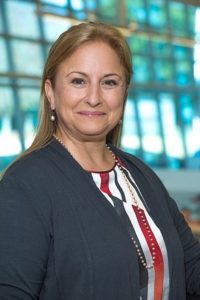 Georgia Tech produces a significant amount of entrepreneurial and technological talent that boosts the economy, creates new wealth and fosters high-paying jobs — but often for other states.

“I want to turn that around,” says Robin Bienfait, “so that when you become a technologist here, you can stay here whether you want to start something yourself or be part of one of the Fortune 500 that has decided to come to Atlanta.”

Toward that end, the Scheller College alumna, who graduated in 2001 with an Executive Master’s of Technology, has opened a 43,000-square-foot Global Innovation Center in Peachtree Corners – Atlanta Tech Park.

This is not a business incubator, she explains. “It’s for startup enterprises that have passed the incubator stage and are going to continue. The Global Innovation Center will give them a place and a community to be part of, and many of these companies will include Tech graduates. I already have seven or eight Georgia Tech-born growth companies that want to be part of it.”

Bienfait’s support of technology-focused entrepreneurship includes her role as a partner of Valor Ventures, a venture-capital firm that invests in hypergrowth tech startups outside Silicon Valley after they have their first customers and are ready to scale their success.

She is an entrepreneur herself, having founded a consultancy called Emnovate that observed its one-year anniversary this past March. The firm provides services to help large and small companies build out their software enablement and solutions, according to Bienfait.

“There are a lot of people who have great business ideas, but they don’t have the technology side of it together,” she elaborates. “I help them with that piece so as to help them grow their business.

“I employ a number of Georgia Tech interns to help me,” she continues. “They get a learning experience while I help grow the relationships with some of these companies because some of the interns will continue working for them as regular employees.”

In recent years, much of her attention has turned toward finding ways to mitigate the high vulnerability of handheld devices to data theft.

“When you design software from the ground up with security in mind first, you build a lot better capability for the customer,” she notes.

While Bienfait’s current activity is an example of home-grown talent finding opportunities to participate in the development of the local tech economy, it wasn’t always so in her case.

Bienfait’s journey began in Valdosta, Ga. Her father was a mathematician and math teacher, which set the bar for Bienfait, child no. 2, and her six siblings, each of whom works in a professional capacity where math is important: finance, education, medicine and engineering.

Bienfait attended Valdosta State, followed by a stint at the University of Maryland’s extension in Cambridge, England, where she received an associate’s degree in business, business law and math and physics. Upon returning to the U.S., she enrolled at Central Missouri State, earning a degree in engineering.

In 1985 she began a career with AT&T in New Jersey as an engineer in semiconductor manufacturing and retired 21 years later as senior vice president Global Network Services and COO EHS. It was during this time that she enrolled at Scheller to earn her graduate degree.

“They wanted to put me in charge of Bell Labs, but the majority of folks at Bell Labs have their master’s or Ph.D., so they sponsored me to get my master’s,” she says. “I picked Georgia Tech because I wanted a business degree that had an emphasis on managing technology, and when you go to Scheller College, you get the best of both.”

While immersed in her studies at Scheller, Bienfait continued working, which at the time meant running a large part of AT&T’s global network. Then came the terrorist attacks of 9/11. Bienfait and her Disaster Recovery — Business Continuity team rolled in and rebuilt all the network elements that had been taken out with the 9/11 hit, thus enabling the New York Stock Exchange to re-open in a matter of days.

As an officer with AT&T, Bienfait was the “Last Man Standing” when AT&T was purchased by SBC.

After AT&T, Bienfait joined Blackberry for a six-year tenure as chief information officer (CISO and CTO Software), after which she accepted the position of chief enterprise innovation officer at Samsung, where she started the company’s Business Services for Global Enterprise division. She retired from the South Korean electronics giant in January of last year.

“Getting a master’s just for the sake of having a master doesn’t make sense,” she says. “But if you are following your passion and an MBA education would help advance your career journey, then the Scheller College of Business is the right place for you. Since the majority of businesses globally are driven by technology and impacted by technology, which is always moving forward rapidly in unpredictable ways, obtaining business acumen along with technical capability is the perfect combination. A great way to think of it is that you’ll be ‘future-proofing’ your career.”